Virtual Issue (2020): Looking Forward, Looking Back: Christianity in Latin America and the Caribbean

In this inaugural virtual issue, Christina Davidson’s article “Redeeming Santo Domingo: North Atlantic Missionaries and the Racial Conversion of a Nation,” winner of the American Society of Church History’s annual Sidney E. Mead Prize and published in our March 2020 issue, offers an opportunity to revisit the journal’s scholarship on the Caribbean and Latin America. Though the number of articles on the two regions has been relatively modest compared to those focusing on Europe and North America, the pieces we have published demonstrate the rich thematic and analytical possibilities available to scholars of these global crossroads where indigenous American and African religions intersected with Christianity as early as the sixteenth century and where the legacies of colonialism and slavery, and their relationship to religiosity, remain deeply entrenched in the modern world.

Variations on these themes, and the commonalities among them, illuminate all the articles here. Karin Vélez’s innovative study of Jesuit missions among the native Guaraní people of Paraguay shows the spiritual power Indians assigned to jaguars in assisting their conversion to Catholicism. Christianity’s imprint on the black Atlantic, and vice versa, features in several pieces. Christina Davidson, John W. Catron, and John Saillant highlight the emergence of diverse forms of African-derived Protestantism and their connections to antislavery, transatlantic communication, race, and national identity, while Roberto Sanchéz investigates the lingering popularity of the Ethiopian saint Efigenia among Afro-Peruvians. Finally, Polly Ha and David F. D’Amico examine religious tolerance and intolerance in two very different settings, the eighteenth-century British Caribbean andtwentieth-century Argentina, respectively.

Together, these pieces offer tantalizing glimpses into a wide-open field and represent an invitation to scholars studying the Caribbean and Latin America to find a home for their work in Church History: Studies in Christianity and Culture.

See our interview with Dr. Davidson about her article here! 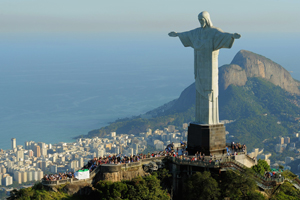