Russia’s invasion of Ukraine on February 24, 2022, combined with religious justifications for the war espoused by Patriarch Kirill, the head of the Russian Orthodox Church, brought sudden public attention to Russia and its dominant religious tradition. The complex religious situation in Ukraine—where the majority of believers are co-religionists with their invaders and, until recently, mostly part of the same Church (the Moscow Patriarchate)—was equally in the spotlight. Yet the search for information and understanding has laid bare how little attention scholars of religion and historians of Christianity, especially in the English-speaking world, have devoted to Orthodox Christianity in Russia, Ukraine, and Eastern Europe.

In the entire ninety-year history of the journal Church History, there have been fewer than two dozen articles dealing with Christianity in the former Soviet Union and Orthodoxy in Russia and Eastern Europe, which is representative of the field. Historians of Russia came to realize after the collapse of communism and the revival of Orthodox Christianity that religion mattered for a complete understanding of the region, both historically and today, and there has been a significant number of studies produced in recent decades [1]. Historians of Christianity, by contrast, are lagging woefully behind. If Russia is even mentioned, it is usually just in passing, and outworn stereotypes tend to be uncritically repeated. 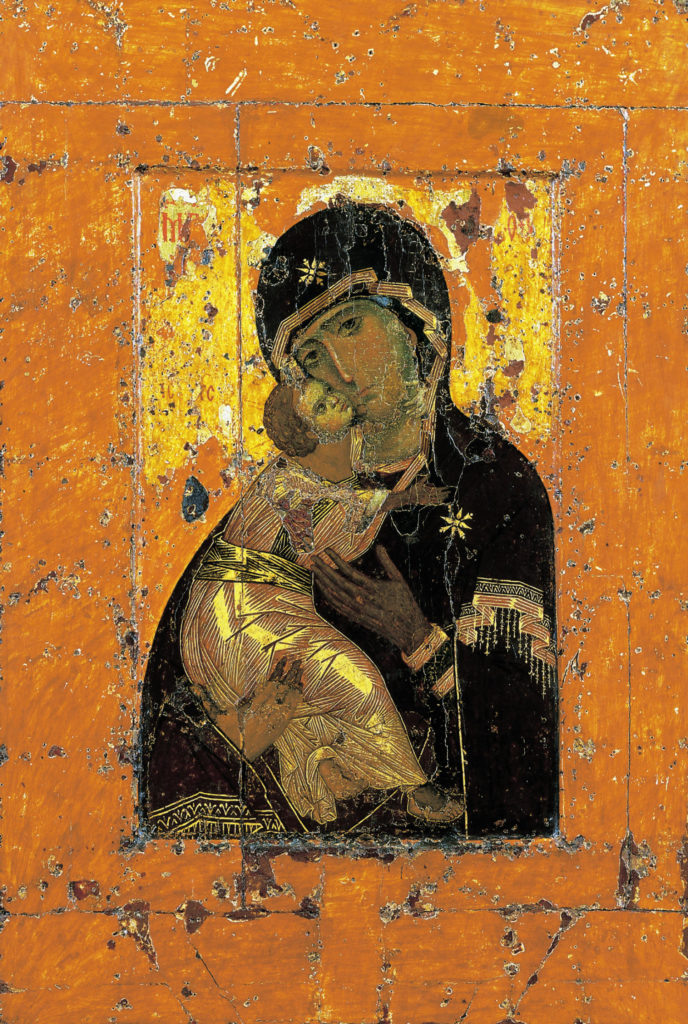 Our Lady of Vladimir, icon painted in Constantinople c. 1131 (Photo from Wikimedia Commons)

In the recent scholarly shift from Western Christianity to World Christianity, the region was largely left out. Scholarly neglect pervades all levels: until very recently, there was no accessible survey for the student or non-specialist which introduced the theology, history, and contemporary socio-political realities of Christianity in Russia [2]. At the top, there are virtually no graduate programs in theology or religious studies in the United States that have specialists in the region to train future scholars. All this, even though the Pew Research Center listed Russia as having the fourth largest Christian population in the world in 2011. Similarly, in a 2018 Pew study of the most religious countries in Europe, the top five all had Orthodox majorities, and all but one of the top dozen were in Eastern Europe/former Soviet Union. If studying religion in the region seemed irrelevant in the twentieth century, thanks to communism, that is clearly no longer the case in the twenty-first century.

The articles included in this virtual issue, representing half of the journal’s output on the history of Christianity in the Soviet Union and Orthodoxy in Eastern Europe, present a fine cross-section of the rich potential the field offers to the historian. The first two articles, written more than a half century ago, are very relevant to understanding the current situation.

Ludvik Nemec, in explaining the Ruthenian Uniate (or Ukrainian Greek Catholic) Church, provides a succinct overview of the incredibly complex history of Christianity in Ukraine, Orthodox as well as Greek Catholic. He notes already in the first paragraph what is still the crux of the contemporary issue—namely that Russia insists on the continuity and unity of Russian history stemming from, and including, Kyivan Rus’, whereas Ukrainians understand Kyiv as the nucleus of a distinct national awareness and therefore national identity. Joseph Wieczynski examines the thought of the early Slavophile thinker Aleskei Khomyakov (1804-1860). Khomyakov developed a schematic critique of Western Christianity as dominated by legalism, formalism and rationalism, and the external authority of the papacy (for the Catholic Church), which he contrasted with the organic, holistic, and spiritual tradition of Orthodoxy, one that was governed by a conciliar approach that included all believers. Wieczynski correctly points out that Khomyakov’s ideal was also an implicit critique of the current state of the Russian Church, which he could not do openly because of censorship. Khomyakov’s thought served to inspire advocates of sobornost’, a more conciliar and less hierarchical approach to Church that culminated in the Church Council of 1917. At the same time, the nuances of Khomyakov’s thought were lost on subsequent Slavophiles and Russian nationalists who took his schema to assert the superiority of Russian culture over that of the West—and the parameters of his critique of the West are still central to contemporary Russian nationalism.

The next two articles similarly touch on themes of continuing relevance. John Basil examines the thought of Konstantin Pobedonostsev, the powerful chief procurator of the Holy Synod of the Russian Orthodox Church from 1880 to 1905, who, as a layman, effectively governed the Church and was a chief ideologist for Russia’s autocracy. Pobedonostsev has often been caricatured as a reactionary obscurantist and lifeless bureaucrat. To be sure, he opposed the adoption of Western political structures such as a parliament or the separation of church and state on the grounds that they had developed on different soil and would be harmful if grafted artificially onto Russia with its different historical experience. Basil explores Pobedonostsev’s influential ideas about the organic connection between a nation’s dominant religious tradition and the state—so that church and state were intertwined in such a way that their separation would be detrimental to both. Though his ideas are indeed alien to the modern Western tradition, they continue to have resonance in the Orthodox world. Stephen Batalden explores a particular episode in the ongoing competition for influence in the Orthodox world between the Russian Orthodox Church and the Patriarchate of Constantinople—and how local actors situated themselves between the two in order ultimately to serve the interests of their own developing national churches.

Matthew Romaniello takes a new look at the role of the Russian Orthodox Church in Muscovy’s first imperial expansion, namely the sixteenth century conquest of the Kazan’ Khanate. The Orthodox Church certainly inserted itself into the new imperial frontier, claimed new sacred space, and integrated itself into the lives of imperial subjects. At the same time, Romaniello demonstrates that the story was not a simple one of conquest and conversion. Vera Shevzov examines lived religion in late Imperial Russia (the decades before 1917). She focuses on the Orthodox tradition of specially venerated or “miracle-working” icons, a dimension of religious life that revolved around the personal and collective experience of the laity, providing a unique window on that experience. J. Eugene Clay turns the focus to religious dissidents in Russia, who drew on apocalyptic imagery to develop a strict pacifism. Due to discrimination in Russia, a large number migrated to the United States, where their communities flourished—until they encountered persecution from the American government for their refusal to register with the draft board when the United States entered World War I.

The final three articles concern the twentieth century. Ionuṭ Biliuṭă examines the career of Transylvanian theologians whose thought developed the darker sides of modern Christianity, including fascism and racism in inter-war Romania, yet who succeeded in adapting themselves to various political regimes, including the communist one—all of which has been largely glossed over in post-communist Romania.

The last two articles focus on the experience of Christians in the Soviet Union.  William Wagner, who passed away unexpectedly last year, investigates how, despite the anti-religious policies of the early Soviet state, some monastic institutions were able to adapt to the new conditions. They managed to survive for a decade after the Revolution and defy Soviet expectations by maintaining a religious community that was meaningful to both its members and the surrounding community. Arūnas Streikus analyzes the ways in which the Lithuanian Catholic Church was a priority both for the Vatican’s Ostpolitik under Pope Paul II and for the Soviet government—which not only blocked the pope from visiting the Soviet Union, but also tried to interfere in connections between the Polish Pope and the Lithuanian Church as well as between Catholics in Poland and Lithuania.

Taken together, these articles suggest a variety of distinctive thematic and analytical issues that provide instructive points of comparison with the experience of Christianity elsewhere. By contrast with Western Christianity, for example, which tended to relate to Islam as a distant “Other” to be feared or conquered, Eastern Christians spent many centuries living side-by-side with Muslims, sometimes as subjects (as in the Ottoman Empire), sometimes as rulers (as in the Russian Empire), but in both cases had to learn to live together and accommodate one another, as discussed at least in part by Romaniello and Batalden. Orthodox lived religion also had its distinctive expressions, such as the popular and widespread veneration of miracle-working icons discussed by Shevzov. Finally, the Soviet Union and Eastern Europe experienced a profoundly different type of secularization than Western Europe, one that was enforced, sometimes brutally, by the state—and many of these countries have also experienced a surprising revival of religion and its public role in recent decades that poses significant challenges to understanding religion in the modern world.

We conducted an interview with our guest-editor, Dr. Scott Kenworthy, to discuss his experience compiling this virtual issue. Check out our conversation on the historiography, or lack thereof, on the Russian and Ukrainian Orthodox Church.

(In chronological order of publication)

The Ruthenian Uniate Church in its Historical Perspective

Konstantin Petrovich Pobedonostsev: An Argument for a Russian State Church

Icons, Miracles, and the Ecclesial Identity of Laity in Late Imperial Russian Orthodoxy

Mission Delayed: The Russian Orthodox Church after the Conquest of Kazan'

The Woman Clothed in the Sun: Pacifism and Apocalyptic Discourse among Russian Spiritual Christian Molokan-Jumpers

Fascism, Race, and Religion in Interwar Transylvania: The Case of Father Liviu Stan (1910–1973)

Female Monasticism in Revolutionary Times: The Nizhnii Novgorod Convent of the Exaltation of the Cross, 1917–1935

Between the Vatican and Moscow: The Lithuanian Imprint on the Death Throes of the Soviet Union (1979–1989)